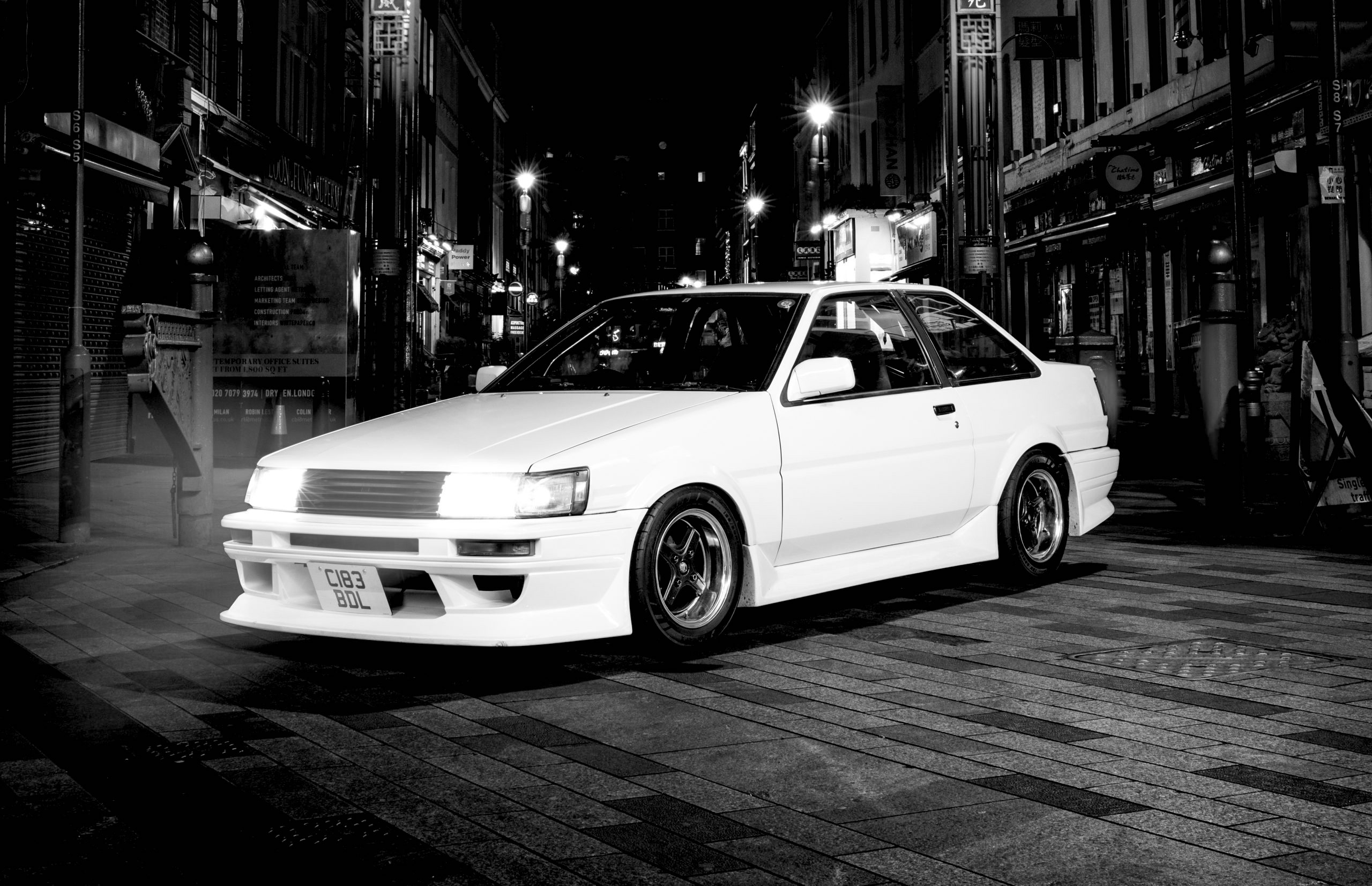 Usually I’d would argue that attending an Ace Café meeting immediately following a day of rain wouldn’t lead to much success. Who wants to hang out in the rain while both you and your freshly cleaned car get soaked? However, if it wasn’t for the saving grace of a pint and some cheesy chips I wouldn’t have met this recently imported AE86 and it’s owner, Mike.

It was an InCarNation night where the weather ensured that a grand total of around 7 cars showed up. Amongst the Golf Rs and Skodas that were there, in the corner, parked on its own near the exit was this bright white Toyota AE86 Levin, sat under the streetlamp. Immediately I felt like a damp evening at Ace wasn’t going to be a letdown after-all. I tore myself away from half-baked cheesy chips and went to go and speak with the owner.

It had only been in the country a matter of weeks before it made its grand debut at Ace. As the story goes, the car was already on a boat over from Japan when Mike was given the option to buy the car. Apparently he’d always been looking around for a white coupe and this car had a certain look to it that appealed. I must say, I agree. There’s something about the entirely white body paired with a subtle bodykit that gives it a clean look. All too often these cars are absolutely battered with add ons and stickers. Toyota’s AE86 is an icon amongst the modified scene, most notably being the go to car for grassroots drifters. This car has a little bit of heritage having been previously enjoyed as a track car in Japan. It’s a GT-Apex 2-door coupe in case you were wondering, engine bay as the original Toyota Motor Corporation plaque displays.

That unsullied state was to be expected though as it had only been in the country for a month or two by the time I first saw it, and the modifications didn’t extend beyond fixing up a couple trouble areas. It rolled off the boat with coilovers, a TRD clutch, 2-way LSD, full exhaust and manifold, roll cage and additional braces welded to the rear axle – and that’s how it remains.

My favourite bit is the 20-valve Blacktop 4A-GE engine swap. The highlight being the bright purple carburettor trumpets that scream for attention when the bonnet is up, but despite those, this car is meant to be a practice in the art of keep things clean. There’s no plans for big modifications to mechanics or exterior, just to make sure that everything’s all neat and tidied up nicely. And there’s nothing wrong with that. Outside of the realm of autistically screeching for attention on IG there’s nothing wrong with just enjoying your car. Being content with what you have. You know, being happy.

That’s what drew me to it in the first place – the simplicity in the approach to a car that is all too often turned into a something that no longer resembles the starting point. Don’t make the mistake of thinking that it’s boring – far from it – but rather than be flashy status symbol it’s after the attention of those who appreciate a pared down approach.