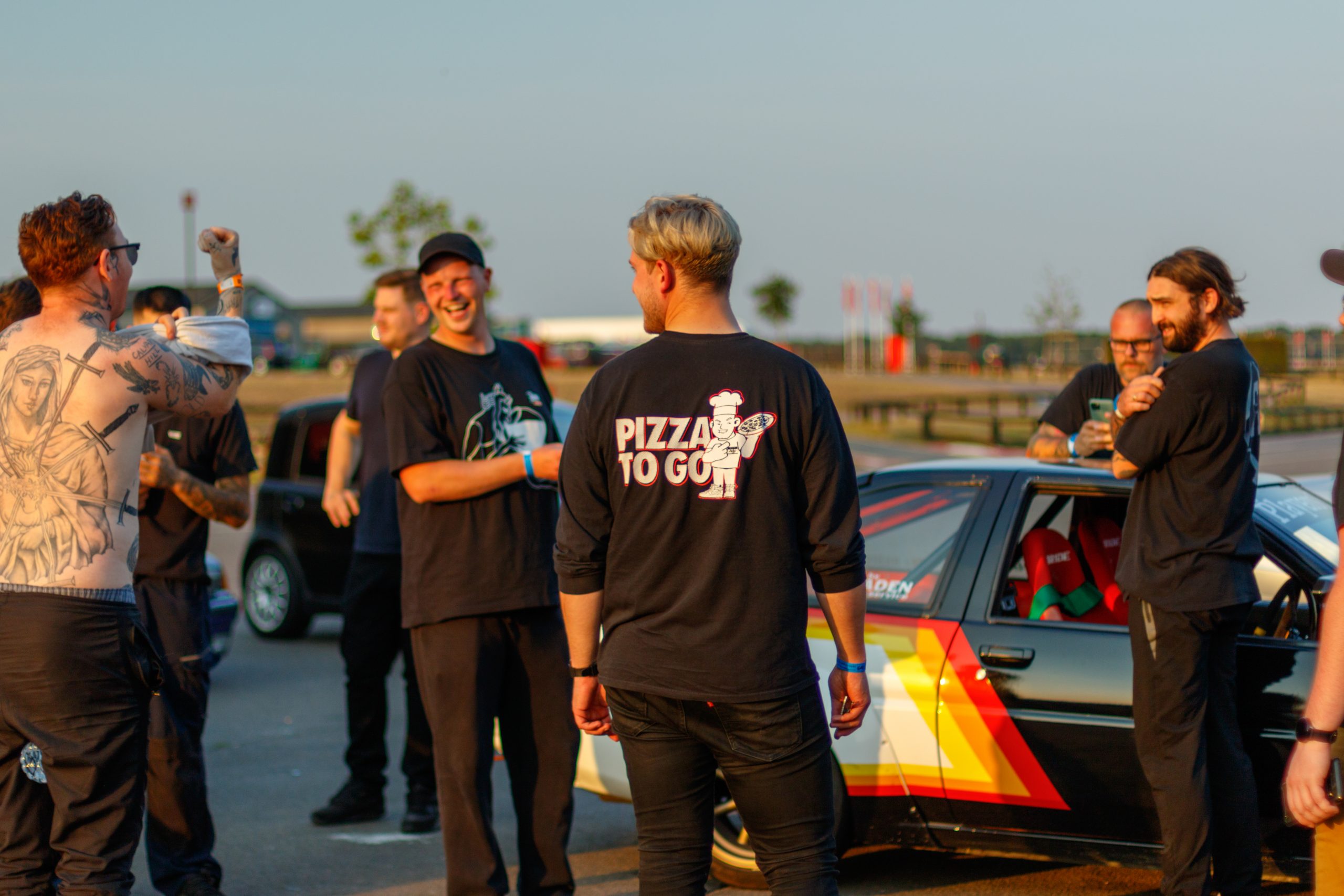 Warm hatches are like hot hatches, but cooler. Literally. They’re sub £1000 shitboxes with 100bhp and ideally less than 1000kgs. If you’re tired of spending 100’s in fuel, eating pads and tyres and being grumpy at track days then a ‘Warm Hatch’ might be for you.

For the Snetterton round of our Warm Hatch World Cup Defty must have been feeling extra sadistic, he left his Yaris at home and decided to brave vibration white finger in his Cayman. Other people bucked the trend too, it seemed that there were more E36s than a Norfolk Arena drift day, and Jaymac must have misplaced his rule book. Yes an AE86 has a ‘hatch’ but it’s not really in the spirit of things. The ‘Warm Hatchi World Cup’ perhaps… One thing was for sure, the idea of bumping doors in little hatches was enough to get everyone excited about driving cars again. It was a pretty hefty turnout.

Mid August was a Covid-19, lockdown restricted, furlough funded and (for some) redundancy-ridden obstacle course. All we wanted to do was drive tiny cars, drink beer and eat curry. It’s a strange thing this hatchback malarky, because even if you didn’t have a warm hatch, you kinda wanted to be there just to soak it all up. The low budget, overweight GMST Avengers assembled.

The pisstaking started immediately, Palmer had arrived in his 996 having just it picked up that morning. Complete with a GT3 badge (it’s not a GT3), a divorce-spec ‘911’ plate and sitting on grotesque chrome Kahn wheels, there was plenty of material to work with. He had left it hard parked in the trailer area to try and minimise this exposure, with absolutely no success.

Luke’s Cadbury-coloured E36 saloon had some questionable arches and visible primer that drew a fair amount of derision too. Pip hadn’t even bothered turning up on time and we were receiving sporadic updates from Chris in the passenger seat. Turns Pip’s tattoo had taken (predictably) too long at Chris’s studio, but at the speed of Panda 100HP they were furiously en route.

With both of my fun cars out of action, I arrived looking like an Uber Exec driver who’d got lost at Stansted and just kept driving. I was then relegated to a passenger with whomever would take me, and Defty happily offered. Snetterton 300 layout isn’t an easy circuit. Sure there’s fast bits and slow bits, but the track is narrow just where you’d prefer it to be wider. Montreal hairpin is surprisingly tight and what even is Coram?

After chasing a Compact Cup racecar, provoking some skids and Porsche arch rubbing, Defty pulled out all the stops and treated me to a big flashy spin at the hairpin and then struggled to get the car restarted. He really knows how to show a date a good time. We came back into the pits and the Cayman decided to put on a post-spin smoke show to rival a Rammstein concert, just as smelly too. Meanwhile Luke had also come in as the aforementioned arches were ripping chicken strips out of his tyres, plus his coolant temps were sky high. None of these issues had anyone fazed, the weather was on-point even if the cars were decaying before our very eyes.

I went to the pitwall next to see Ryan and Ben in the Lupo and 106 Rallye going hammer and tong lap after lap. The spirit of WHWC was alive in these two. Each lap they came past with almost the exact same distance between them, then they’d swap lead/follow and somehow manage to maintain that distance again. The Lupo caught in the corners and the 106 pulled on the straights.

Luke came back in after going out with Pip as a passenger in the Fiat Panda 100 ‘Townhouse’ with tales of heavy body roll and tyres that appeared to de-bead and then re-seat mid corner. It’s truly a magical car. Chase footage from the lovely Jono surfaced days later would support this, along with treating us to beautiful clouds of inside wheel tyre smoke. Who needs a diff? Well, probably Pip actually.

I went out with Defty again but banned me after he spun again. I’m not entirely sure how it was my fault. We both thought he had it covered, but after a few frantic pendulum swings we were facing backwards with two Clios heading straight for us. Who’d have thought a mid-engined sports car might be a little challenging at the limit? Talk about clichés.

After being banished by Defty I jumped in the mighty Lupo, piloted by the cult leader, Mr Garage Midnight himself. I knew Ryan was fairly serious about track driving, but I didn’t think he’d be the type to weave on the outlap to warm up his tyres. He explained the steering steering rack wasn’t firmly located to the subframe anymore and he was actually trying to reset the steering to centre. I couldn’t believe he’d gone to the trouble of installing active toe on the Lupo. Turns out trickle down technology is a real thing.

The laps with Ryan were ridiculous, we went out chasing Defty in the Cayman, not quite managing to keep up, but not really letting anything past. In a 1.4 Lupo, with a diff and some tyres. It was really using all 100bhp.

Ryan let Jono’s mate in his Z4 through on Bentley straight but he quickly returned the favour when we got to some corners again. The Lupo absolutely ripped. I think the best way I can describe the experience is if you re-visited your first car you had when you were 17. Fresh from your driving test, patrolling the mean streets of your home town, giving this shitbox absolute hell, but now you’ve got a bit more knowledge, a bit more driving skill (just about), and a bit more cash in your pocket to spend on meaningful modifications.

You’re still treating this car with the utter contempt and lack of mechanical sympathy you had when you were a teenager, but now it’s got the goods to take the abuse. Sure it sounded like a mediocre 4 cylinder being thrashed to within an inch of its life. Yes the body roll made the Costa Concordia look upright, and yes, it did puke power steering fluid all over the paddock, but this Lupo spent lap after lap after lap almost wholly in the red band between 6k and 7k. It gave absolutely no complaints, and even took a little off road excursion in its stride. I spent most of the time laughing in the passenger seat and thinking about wether I should buy a Lupo.

After several laps Matt turned his E36 into the long desired but never produced “compact M3”. Not by choice and only dampened the spirits slightly. Relieved to see him OK, we gathered around our fallen soldier. It’s amazing that he was the first to start cracking a joke or two not long after it happened. Still in the mood for curry and beer, everyone thought it best to pack up and engage party mode.

GMST rolled out to invade the town of Diss. Luke had booked us a table at a decent curry spot and the beers flowed, the naans were shared, and the tales of the day came tumbling out. After we’d eaten, somehow Luke managed to convince the curry house that they should just let us drink beer on their sofas while they cleaned, cashed out, and locked up. Why does a curry house even have sofas? Why were they so accommodating to such an unreasonable request? Questions like Diss might never be answered.

While the afterparty raged we received news that Ben had killed the 106 Rallye on the way home. That explains why it seemed to be exceptionally quick. Positive Vibes were still in action though, as Ben happily showcased the heavy rod knock by revving the engine on the side of the road for our and his adoring fans’ amusement.

This had definitely been the blowout I think we all needed, there’s nothing better than a day out with your pals, driving cars, eating curry, and drinking beer. In that order preferably.

Warm Hatch World Cup is supposed to be an antidote to ever increasing budgets and higher and higher horsepower track cars. It’s about having something cheap, capable, somewhat reliable, but most importantly, fun to drive.

It shouldn’t matter about lap times and who you’re overtaking. It’s surprising what something lightweight with a keen driver with no regard for his own, or his passenger’s safety, can accomplish. As a shitbox MX5 owner I’m definitely no stranger to the concept, but it’s great to see it being brought to a wider audience. Pick one up, or just bring whatever you normally drive to Cadwell in November and come chat shit and bang doors. Black flags not included, you have to earn your own.